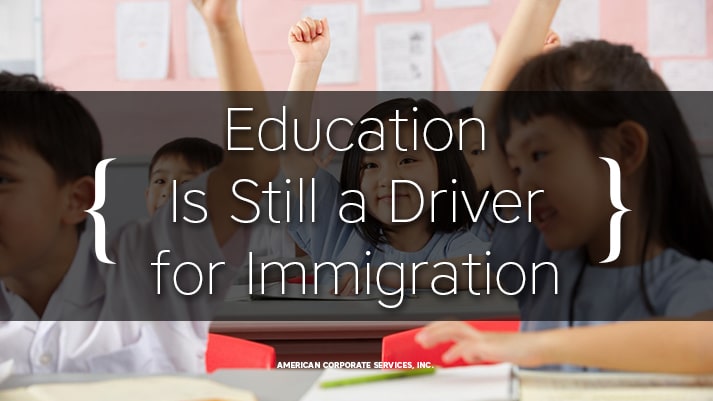 Education continues to be one of the top reasons why Chinese want to immigrate to other countries, in particular, the United States, Canada, and the United Kingdom. All but one of the Top 25 Universities (as named by Times Higher Education World University Rankings) are in these countries. The other – ranked ninth – is in Switzerland.

It makes sense that, when HNWI want their children to have the best education money can buy, they consider the top 25 schools. There are two primary conclusions – opposite sides of the same coin – that Chinese parents draw from this list of schools.

Therefore, if Chinese parents want their children to attend a Top 25 school (or even the Top 40), the student must obtain immigrant status in the country where the school is located.

With over 460,000 Chinese students already enrolled in foreign colleges and universities, China continues to be the best source of international students for the U.S.

In the meantime, “China sees itself as a natural competitor to the US, and it can’t have its elite creating all these alternative pathways to education,” so the Chinese government is attempting to reduce or eliminate international study preparatory programs within their own system. This move by the government may backfire, as “its elite” have the resources to relocate their families through other means, most notably the EB-5 investment visa program.