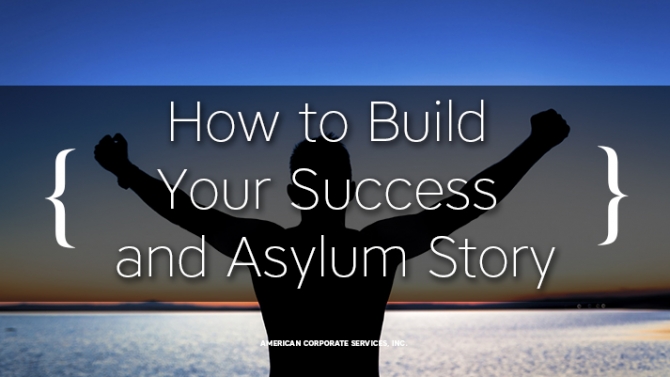 This is Allan Samson continuing my discussion on immigration law.

Generally, as a matter of law you have to apply for asylum within one year of coming to the United States – 6, 8, 10, 11 months, if you are here longer than a year, unless there’s a convincing reason why you waited that long in applying for asylum (perhaps the country conditions in the country have changed) then I would suggest you not do this and apply beforehand, before one year.

If you’re coming to the United States and planning when you should apply for asylum, my advice is probably wait closer to the 12 month period (maybe 8, 9, 10 months) because this will give you the opportunity to collect documentation.

If there’s any one suggestion I could give in how to improve your chances of success in applying for asylum, it’s documentation, a realistic story that shows you are afraid and documentation that shows that you’ve been punished or persecuted and you’re likely to face persecution again if you return to your country.

Now, there’s got to be a realistic basis for your fear in applying for asylum.

So there is no realistic basis for your asylum. If you apply for asylum and you firmly believe this, the officer will deny your application for asylum by saying that this person has a realistic fear of returning to England in his own mind, but is there a realistic danger to he or she if he does return to England? The odds are, the chances are no, there is no way that the Queen of England is going to put out a contract killing on your life – but other countries you do have a danger and its those countries which have the best success rate in applying for asylum.

Now, if you do apply for asylum, you have to know a story. You have to develop a story. What happened to you, when it happened, how it happened and what happened. Be specific, give dates, describe the events that have happened to you, when it happened, how it happened…. Your story must be believable, must be convincing. Now, if it’s not a real story, if it’s a fake story once again as I mentioned in other lectures, immigration officials are professionals. They know how to spot, how to distinguish between a fake story and a realistic story so you’re not likely to be able to fool them in this regard so your story in this sense should be realistic, it should describe what has happened to you and it should be a “good story”.

A “good story” is supported by documentation. Let’s say you were beaten by the police: is there a police record, is there a hospital record?

Documentation is extremely important in building up your chance of success and asylum story.