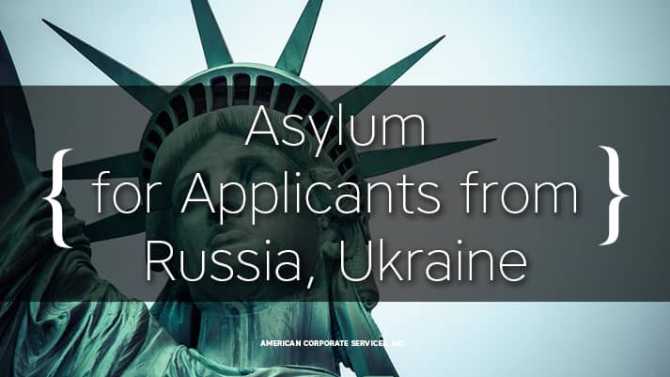 Hi, this is Allan Samson, immigration lawyer operating in California.

I’d like to talk a little bit about asylum applications if you’re from countries such as Russia, Ukraine, and in a general sense, countries from the former Soviet Union.

There’s a strategy choice in applying for asylum from those countries. There are some stories, some reasons which have a greater success rate than others and Id like to talk about those right now. If you come from Russia, the greatest success rate would be if you’re homosexual or LGBT because of the Russian government policy to discriminate against gays and LGBT people. This is the basic reason, but once again it’s not… just don’t say you’re gay, show that you have been involved perhaps in the past in gay organizations in Russia, or gay clubs or with photographs of you in gay meetings.

My Mother and Father were born in Russia but I don’t speak Russian – I grew up at a time where they wanted children to be Americanized so they never taught me Russian. I’m married to a Russian woman but she speaks better English than I speak Russian, so the only thing I know are the [inaudible] words which I cannot mention here.

Okay, the importance in an asylum application for Russia is a good story, letters of reference from friends in the United States, and if you can get any documentation… let’s say you were at a Gay pride parade in Moscow and the police broke it up. Maybe photographs of you in the parade or maybe if you were beaten and went to the hospital, hospital records.

Other good reasons to apply for asylum from Russia and from Ukraine would be religion, particularly in Russia : Seventh Day Adventists, or Jehovah's Witness.

I’ve handled a number of cases, gay cases and a number of Jehovah's Witness and Seventh Day Adventists cases and these are religions which are not tolerated by the Russian government.

When I first started practicing law many years ago, a good story was that you’re anti-communist but of course now it makes no sense to be anti-communist, there is no longer communism in the Soviet Union so the key stories would be Religion, Religious Discrimination, Gay Discrimination and if by any chance you had the ‘good luck’ to be arrested or be beaten in anti-Putin demonstrations and you can document that you were arrested or beaten, you can certainly use this in a good asylum application in the United States.

Right now or several years ago when I was starting to practice you would have your asylum application interview 2 months after the USCIS received your asylum application. Now it’s probably almost a year before your get your asylum interview and this gives you the opportunity to apply for work authorization if no decision has made in your case for more than 7 months or more than 6 months, 180 days, you can apply for work permission.

If you need to work, you want to apply for asylum, you have a good case for asylum but you need to work in the meantime, right now is a good time because of the slowness of the American legal system, it will allow you to be able to get work permission while your application is being considered.

Many clients that I have had have failed in applying for asylum, they’ve hired me as their attorney and have won in front of the immigration judge. I’ve filed a few cases myself where my client lost at the asylum interview, I felt it was a good case and I encouraged them to keep me as their lawyer when they were going in front of the immigration judge and those cases I won.

Just because you lose at basic level does not mean you cannot win at higher level. It’s certainly possible. Judges have more knowledge about the requirements for asylum than asylum officers do. So from Russia and Ukraine: political reasons, anti-government feeling, anti-government demonstration, gays and LGBT, and minority religious beliefs and memberships will be valid reasons for applying.

Probably don’t waste your time in applying for economic reasons. Another good reason would be spousal abuse: if your husband or wife beat you and your feared for your life and safety and you reported it to the police in Russia and the police did not protect you or they told you to go back to the house and you ere beaten again… this is a good reason to apply for asylum in the United States, if the government of your home country is not willing or able to protect you from spousal abuse. There are increasingly successful cases from Russia and from Latin America on this basis now.

If you go to a lawyer that does not have a good reputation, your story will not be viewed with believability or credibility.

Okay, thank you very much for your attention.