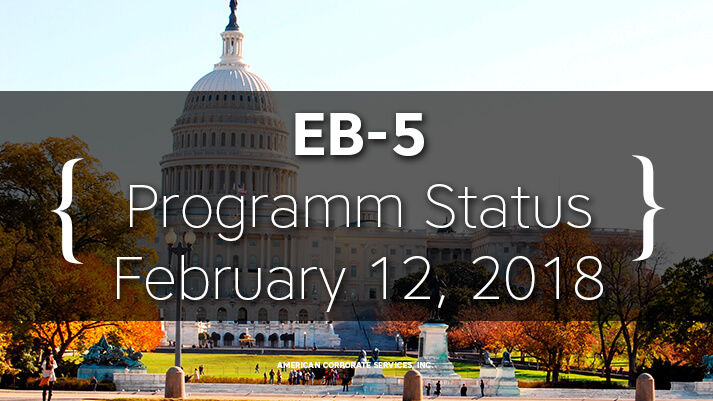 It looks like we could be about to experience some movement on the immigration debate in the United States Senate.

However, Congress will be addressing proposed immigration reform this week as Senate Majority Leader Mitch McConnell (R-KY) will open debate on H.R. 2579 (Broader Options for Americans Act) on the Senate floor this afternoon (February 12, 2018).

Although the bill deals primarily with healthcare matters, “the measure is expected to be the vehicle for immigration legislation” during the period of open debate.

As usual, it is too early to speculate what might transpire, although DACA and other immigration concerns will likely hold the most general attention from the media and the public.

There are generally two potential areas considered ripe for change. The first is the minimum investment amount for EB-5 Investment Immigration Visa petitioners. The second is the status of the Regional Center Program in which investments are aggregated into a single fund as a new commercial enterprise and become part of the funding stack for multi-million-dollar projects.

A change to the minimum investment would affect both the direct and indirect investments. Changes to the Regional Center program could affect petitioners who are already at points in the process. It is likely that the definition of Targeted Employment Areas will be addressed as well.

The highly-publicized DACA protections end on March 5, 2018, so the matter of addressing the virtual plethora of long-standing immigration issues seems, at long last, to have a deadline. Some observers believe that lawmakers want to get the entire matter resolved in one fell swoop. Should this not be accomplished, we are likely to see another omnibus bill extending funding for the EB-5 program through the end of the current fiscal year (September 30, 2018).

On a final note, there may be an unexpected boon for EB-5 investors. If Congress should eliminate the Diversity Visa program and maintain the same total number of visas, 50,000 will become available. It is possible that some of these could be allocated to EB-5 investors.

Whatever changes are made – if any – would be implemented with an effective date at least 60 to 90 days after signed into law by the President.

While the outcome remains uncertain, Americans and foreign national investors, have a reasonable expectation of some resolution.