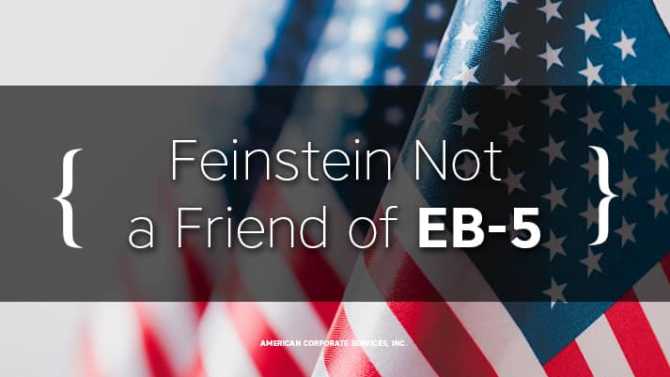 Senator Dianne Feinstein (D-Ca.) is the second ranking Democrat on the Senate Judiciary Committee. She is a senior member of the Senate immigration subcommittee and San Francisco’s most influential Democrat.

In November 2016, Senator Feinstein stated “When the program comes up for renewal in December, Congress should allow the program to die.”  However, on December 9, 2016 Congress passed, and President Obama signed, the “Continuing Resolution” which extended the EB-5 immigrant investor program to April 28, 2017.

Sen. Feinstein’s stance on the EB-5 program should cause concern to investors looking to utilize the program. She appears to be the first senator to state her negative perspective, while Senate Judiciary Committee Chairman Charles E. Grassley (R-Iowa) and ranking member Patrick J. Leahy (D-Vt.) are for significant changes within the program.

Some of Feinstein’s comments published in Roll Call are as follows:

“Simply put, EB-5 sends a terrible message to the millions of immigrants patiently waiting their turn to enter the United States legally to be reunited with their families or for legitimate employment. It says that American citizenship is for sale, and that’s not what our country stands for”.

“The bottom line is that the EB-5 regional center program sends a message that American citizenship is for sale, and the program is characterized by frequent fraud and abuse. When the program comes up for renewal in December, Congress should allow the program to die.”

It appears the majority of congress are behind the EB-5 program, and believe in its benefits.  Benefits for both the investor and the U.S. economy. However, changes are coming to the program, that is inevitable.