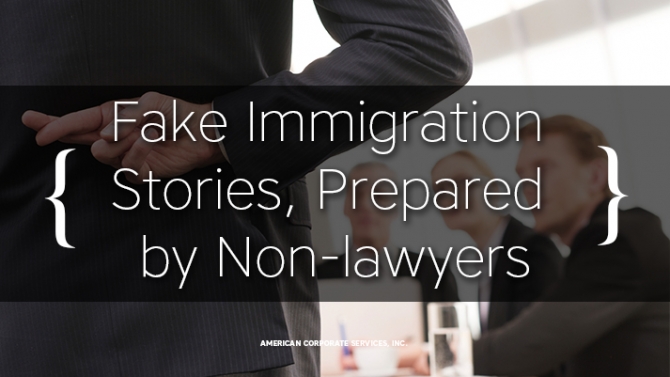 Good afternoon again, I was talking about cases where clients had non-lawyers helping them prepare a first asylum application and a very bad job was done and they lost. Then they came to me when they lost and they had already been sentenced to the immigration court. You can usually tell a bad application that is an application that a non-lawyer has prepared. It will repeat itself, it will be copied and copied and the story will not be a good, realistic story.

For example, whenever I hear a story about a woman who violated the one-child policy and was forcibly aborted and she tried again to have a child again several months later and she was arrested and put into prison. She escaped from jail by breaking and opening the windows and running away. Somehow after she ran away she got to the United States… this is a fake story and all lawyers will know it’s a fake story.

Whenever someone comes to me with that, I have to tell them it’s a fake story and that if you tell me the truth, what happened, I can correct the fake story and try and hopefully we can win. I’ve had a lot of cases like that and they first thing I do is tell the judge I’d like to start all over again because a non-lawyer helped my client prepare a story that’s not true and my client didn’t know what to do but agreed with the non-lawyer, thinking the non-lawyer was actually a lawyer.

I’ve won several cases that started out as fake stories. One of the most interesting cases I’ve had (this was not a fake story but it was a very funny story) where a client of mine who was very tall claimed that he was demonstrating in 1989 in Tiananmen Square against the government. He was able to get a visa to come to the United States without being arrested and they story itself was not really a good story… he didn’t have too much to offer or present and I told him that I am not 100% certain that we can win this case. What I did not expect was that the judge would be fascinated by how tall he was. He was 6 foot 6, much taller than the average Chinese and the judge insisted on sending outside for a tape measure to measure how tall he was. Ultimately the judge ruled in his favor, he decided to grant an asylum because he was so tall he was likely to be arrested if he had to return to China because the Chinese government had videos of the students demonstrating in Tiananmen Square.

What I hadn’t expected was the judge would grant him asylum not because he has a good story or he was really in danger but because he was so tall. Even good lawyers can expect the unexpected things to happen!

So, all these unexpected situations will occur and a good lawyer will prepare for the worst, hope for the best, and sometimes clients will ask me, ‘what are my chances of winning?’ and I like to give them my honest assessment of the case, my honest opinion. If I think it’s a weak case I’ll tell them that I think it’s a weak case - I’ll try my best but I cannot guarantee your success.

If it’s a strong case I’ll tell them I think you have an excellent case, I think I can win because your case is so strong and because you obviously know your factual material – you know your story.

Once again, the important thing is to know your story, know what happened to you, know the dates that happened and again, supporting documentation if you can. I get a lot of cases like this but my time is limited so I’ll stop now – thank you very much.