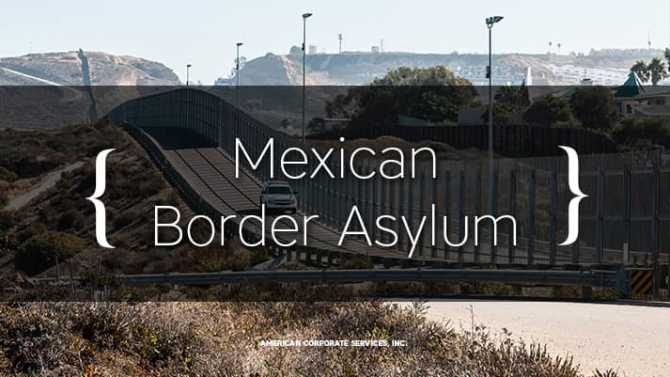 Although most asylum applicants make their petitions after they are already physically in the U.S., some foreign visitors choose to ask for asylum when they try to enter the U.S. at the Mexican border. The direct and immediate result is that the applicant will be housed in a detention center before immigration court hearings regarding their application for relief.

In the past, if the detainee has a qualified sponsor in the U.S., the applicant would most likely have been released under a bail bond after several days in the detention center.

Since late January 2017, all detainees accompanied by their minor children will stay in custody for two to three days at most. If entering the U.S. with no minor children, they will be in custody for at least six months. After that, only detainees who are housed in specific detention centers are qualified to a bail bond – if they have an eligible sponsor. These will be released from detention and may wait for their court hearings in a place of their choosing in the U.S.

This situation is complex and changing every day – so we recommend that you consult with an experienced Immigration Attorney before attempting to enter the U.S. via the Mexican border. It is even better to contact the Attorney before traveling from your home country to Mexico. While still in your country, you will be able to prepare for the two-and-a-half to three hours long interview with the USCIS officer and prepare your documents confirming your political asylum case. Our immigration attorneys are licensed in the USA and – they speak your language.

Other detainees need to remain in their assigned detention centers until their immigration court hearings are completed. If their applications for relief are approved, withholding of removal will be granted by the immigration judges, and the applicant will be released. If not approved, they will be deported directly from detention centers. An Attorney’s advice may increase your chances to be housed in a center, which is qualified to issue a bond after a six months’ stay.

Recently, we helped a client who was released from a detention center, then moved to another place, which is not the area where he was detained. He failed to attend a scheduled immigration court hearing. The immigration judge made an unfavorable decision because he was not present at the hearing. In this case, we helped the client to submit a motion to reopen an in absentia order and wait for the immigration court’s decision. If this client had hired our Law Firm in advance, we would have advised him about the logistics of his immigration case. We would have received copies of all documents addressed to him from the USCIS and represented him during the interview at the detention center and during all court hearings.

We advise all the asylum applicants to remember your immigration court hearing date and time, and be aware of that you must be present in the court hearing unless the hearing has been successfully rescheduled.

Immigration laws are complicated, the system is overtaxed, and the process is lengthy. For these reasons, we advise any person seeking asylum to speak with an experienced Immigration Attorney before attempting to enter the process.