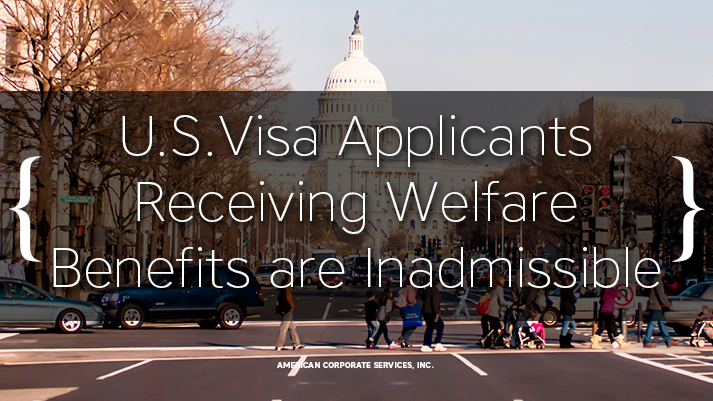 The USCIS and the Department of Homeland Security have long followed the policy of the U.S. Congress prohibiting approval of applicants for either temporary or permanent visas if those applicants have been relying upon, or are likely to become dependent on, public welfare.

Which Applicants are Inadmissible?

Section 212(a)(4) of the U.S. Immigration and Nationality Act provides that

Spouses and dependent children of visa applicants are not subject to the public charge scrutiny. Unemployed but otherwise qualified applicants who are related to current legal residents in the U.S. may be granted visas upon execution of an Affidavit of Support by those relatives. Similar courtesies may apply to applicants who have alternative sponsors in the U.S.

As we have mentioned, this is not a new policy. It is a “Policy Alert.” The alert was issued to remind all stakeholders that, as of February 24, 2020, the rule will be more strictly enforced under the administration’s efforts to improve the current immigration practices to better preserve the general welfare of its citizens.

The alert was issued by the USCIS following a U.S. Supreme Court’s approval of the Final Rule. That verdict overturned the U.S. District Court of Illinois’s validation of an injunction that declared the public charge rule inadmissible in the state of Illinois.

How does the Rule Apply?

The rule applies not only to new applicants but also to current legally resident foreign nationals applying for an extension of or a change of status of their current visa. In these cases, the visa holder must “demonstrate that they have not received public benefits over the period in which they have resided in the U.S. under their current visa.

In any case, the ruling does not apply to applications and petitions filed before February 24, 2020.

Immigration rules seem to change continually. The system is complex and, therefore, often difficult to fully understand. That is why everyone with a background in immigrating to the United States recommends consulting with a qualified and experienced Immigration Attorney.

We invite you to contact our Immigration Attorneys at the ACS Law Firm for more information regarding your immigration concerns. Our entire staff at American Corporate Services Law Offices, Inc., is prepared to assist you and show you how we can help to make your immigration dream come true.