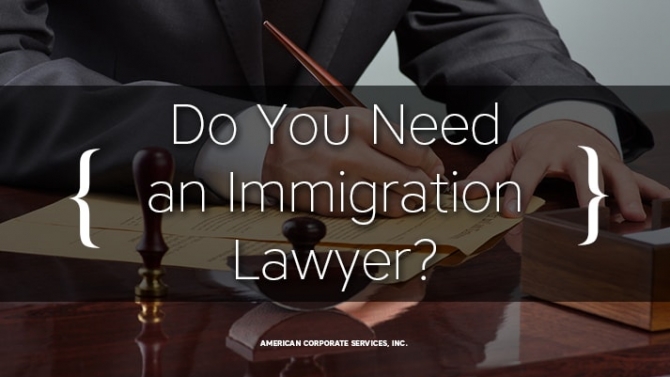 The next thing I’d like to discuss is: do you need a lawyer?

Well, naturally I think you need a lawyer because I make money, so I want you to have a lawyer, particularly me!

They’re not attorneys, and a lot of the business I get, a lot of the money I make comes from mistakes that are made by so-called “immigration consultants” who give you the wrong advice, who basically screw you up and you get to be in a very difficult situation. So, if there’s one thing I can tell you whether to see a lawyer or not, my advice is see a lawyer rather than an immigration consultant because an immigration lawyer will have the requisite, the necessary experience to give you advice.

For example; I’ve been in practice for 40 years… most lawyers I know have been in practice for ten or twenty years, they know immigration law, they’re members of the American immigration lawyers association and this is… they specialize in this type of law and they are not going to tell you then have a professional responsibility basically not to give you completely wrong advice. Sometimes lawyers make mistakes, not everybody has 100% success rate, but I would go to a lawyer if I were you then ask them what kind of success rate they have, what kind of law they specialize in – lawyers are pretty eager to tell you.

Of course not. Nobody wins 100% of their cases, and if they tell you they do, be very careful – they’re probably not telling the truth.

A good lawyer will probably win most of his or her cases and will give you the best advice. One thing: a good lawyer… if you’re thinking about lying and you want the lawyer to be part of your ‘scheme’, so to speak, a reputable lawyer will not do this.

If somebody comes to me and says, ‘my marriage is a fake marriage, but I want to get a green card and I want you to be my lawyer’ I would say, ‘thank you, good bye, I’m not going to take the case, I cannot take the case because I value my law license in California, I value my license to practice anywhere in the United States and I will not take a case where I know the case is a fake case’.

Don’t put any money down if you’re paying a non-lawyer, it’s just not worth it. I make money because the non-lawyer is likely to make a mistake. They may charge you less money but you’re probably going to have to go to a lawyer to try and rectify or to try and correct the mistake.

If you think it’s a simple case, if you’re in love with your American citizen, your husband or wife that your marrying, it’s a first marriage for both of you – then you may not need a lawyer but you’ll still have to be careful.

Look for those danger spots… what is a danger spot? Well, for example, I have a 30 year old Russian who comes to the United States and marries a 65 year old American. The age difference of 30 or 35 years is certainly going to attract the attention of the immigration department in the interview. Does it mean you cannot be in love with somebody 30 years older than you? No it doesn’t, but there’s the likelihood that it will be investigated, so that’s the type of situation where you would definitely need a lawyer to advise you. Okay, I think I said most of the points. Thank you very much.