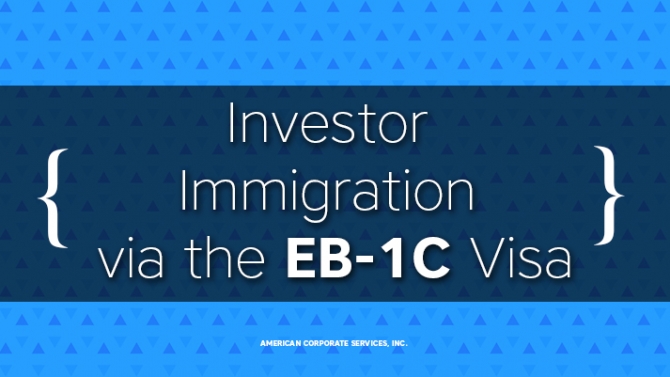 The EB-5 investment visa has been plagued by long processing times and uncertainties for Chinese investors – especially those who wish to come to the USA in a shorter time. One of the better alternatives available is the EB-1C immigrant visa program for Multinational Managers.

The processing time for EB-1C visas is typically much shorter than several years than for an EB-5 application to be approved. Cases are processed in the order they are received. Although times may vary, it is reasonable to expect that most cases can be handled within eight months – far better than for EB-5.

Qualifications for the EB-1C Visa Program

Of the U.S. employment-based, preferential visas available for foreign nationals, the EB-1C is specifically designed to expedite the transfer of executive and high-level managerial staff employees to a company’s U.S. facilities and to permit those persons and their families to enter the United States as permanent residents. The specific purpose of the EB-1C visa is to promote international commerce by expediting the immigration of current high-level employees to the U.S. to enhance a company’s operations here. Unlike most visas, where individuals are the applicants, the company is the applicant for EB-1Cs.

The USCIS has established simple, but separate, eligibility guidelines for the applicant company and the employee. Since the company must already be operating internationally and in the U.S., the U.S. entity is the petitioner or applicant. The immigrant must have a position in which he or she manages an essential function of the business. Mid-level managers or first-line supervisors do not qualify.

Benefits of the EB-1C Visa

While this process is much more expedient than EB-5, it is also much more complicated. The information here is a summary. Every step includes understanding technical and timing details that require the expertise of qualified immigration attorneys.