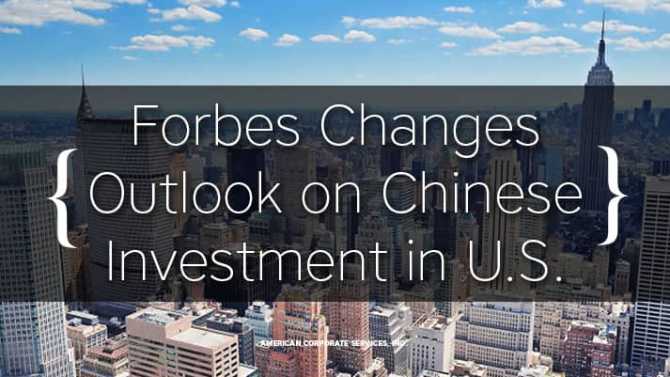 The highly-respected Forbes website recently did something that almost no other news media ever does. They published an article on December 18, 2016 about Chinese investment in U.S. business. The headline was “China Investment in the U.S. Hit An All-Time High In 2016, But Don't Expect The Same In 2017.” That’s not what is so unusual.

The unusual part is that they publish another article about Chinese investment in U.S. business on February 7, 2017. This time the title was “China's Business Elite Won't Have Trouble Investing In The U.S. Under Trump.”

To be fair, both articles carry a disclaimer saying, “Opinions expressed by Forbes Contributors are their own.” In fact, we laud Forbes for publishing both articles. It is, in fact, refreshing that they would do so, considering the rampant bias across the broad spectrum of media these days. It is also an indication of why there is so much confusion regarding foreign national immigration and investment.

Considering the first article was based largely on responses to and misinterpretation of then president-elect Donald Trump’s campaign rhetoric, it is not surprising that much of the content was just blowing in the wind. Because of Mr. Trump’s comments favoring protectionism and opposing several alleged Chinese policies, the high-profile individuals quoted in the story painted the relationship between the U.S. and China with such a wide brush that it painted the world of business and investment with an entirely wrong color. Just because we have political differences that doesn’t mean we can’t do business with each other. We may need to take a different approach but that does not mean a cessation of commerce and investment.

Written about two weeks post-inauguration, this story led with the news that Alibaba CEO, Jack Ma, had announced that his company plans to invest in U.S business to create a million jobs in America.

Following that, the writer revealed that Hon Hai Precision Chairman, Terry Gou, is considering investing $7 billion in the U.S. “apparently to satisfy Trump’s same quest for creation of American jobs.

The article properly states that ‘China’s smartest and richest investors will get into the United States under Trump.” Expanding upon that point, the writer explains why.

“The prospects in private investment point to a what may be a broader openness to investment that’s neither trade nor a threat to American jobs or corporate profits. Chinese investors with the smarts and capital could set up U.S.-based subsidiaries to avoid tariffs, then hire American workers.”

When all the politicking finally fades, common sense usually prevails. The United States is a very attractive investment for Chinese business people. Their investments could mean millions of jobs for disenfranchised Americans who became unwillingly unemployed under the previous administration.

As always, we welcome your input and discussions about immigration on our LinkedIn group: Business and Immigration News & Views https://www.linkedin.com/groups/8140530

Dr. Gregory Finkelson’s new book, Moving Your Family to America – A Simple Guide to Business and Investment Immigration is now available in English and Chinese versions on Amazon. Click on the appropriate language link to order your copy now: www.Biz-Visa-USA.com.