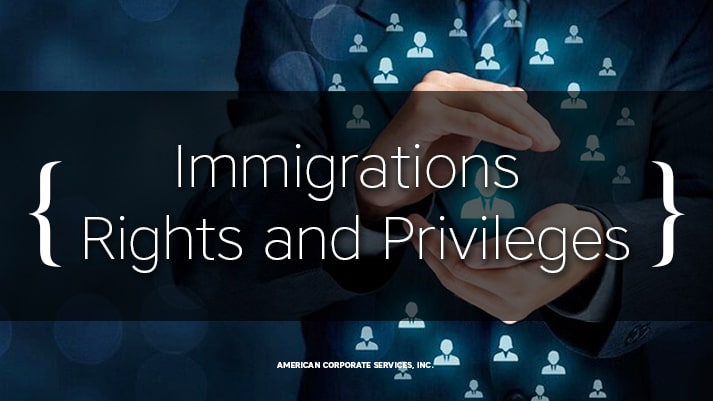 Whether visa applicant, immigrant, or citizen, it is important to understand the difference between rights and privileges. Unfortunately, especially for younger generations, we are experiencing a lack of ability to ascertain and differentiate between the two.

One of the best-known sentences in the English language is the following portion of the Declaration of Independence:

“We hold these truths to be self-evident, that all men are created equal, that they are endowed by their Creator with certain unalienable Rights, that among these are Life, Liberty and the pursuit of Happiness.”

These are not rights granted by government to Americans, but, as the framers of the declaration so eloquently expressed, ones that have been granted by the Creator of all mankind. They made the statement because they so strongly believed that the British government was taking those God-given rights away from the colonists.

The Unites States Constitution and its amendments grant specific rights to its citizens. In fact, the original ten amendments are commonly referred to as the United States Bill of Rights. The Bill of Rights was established to protect the rights of U.S. citizens, including freedom of religion, freedom to bear arms, freedom of speech, and freedom from unwarranted search and seizure.

Immigration to the United States is not a right. It is a privilege. There has been an abundance of conversation about legal and illegal immigrants in the U.S. The privilege of living in the United States is granted to those who have followed the legal process for obtaining that privilege, regardless of the visa type for which they apply.

“Even though their stay in the U.S. may be temporary, [legal immigrants] … have many of the basic rights that U.S. citizens have.” For all practical purposes, once the privilege of legal immigration has been granted, legal immigrants are granted nearly every right of American citizens, except the right to vote in U.S. elections.

In short, it is a privilege to become a legal resident of the United States. The U.S. Government grants that privilege. Once it does, it also bestows upon those individuals the same rights enjoyed by American citizens. For those who obtain a Green Card, both the right and privilege to apply for American citizenship is also granted within the framework of the law.

Tell us what you think on LinkedIn.

Dr. Gregory Finkelson’s new book, Moving Your Family to America – A Simple Guide to Business and Investment Immigration is now available in English and Chinese versions on Amazon. Click on the appropriate language link to order your copy now.