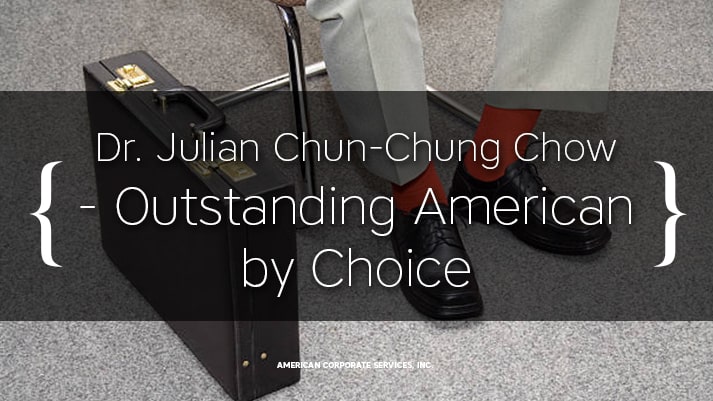 The Outstanding American by Choice initiative highlights the importance of citizenship rights and responsibilities through recognition of the outstanding achievements of naturalized U.S. citizens. On October 19, 2016 Dr. Julian Chun-Chung Chow received this honor in Oakland, California.

Dr. Julian Chun-Chung Chow received his B.A. in Sociology and Social Work from Tunghai University, Taiwan, and both his MSSA and his PhD in Social Welfare from Case Western Reserve University. His current research focuses on community practice and service delivery in urban poverty, ethnic, and immigrant neighborhoods; community analysis and needs assessment; program planning and development; and cultural competency services.

Dr. Julian Chun-Chung Chow is a professor at the School of Social Welfare at the University of California, Berkeley. He is considered a leading scholar in community practice, service delivery, and urban poverty in the field of social work. In 2016, Dr. Chow was appointed as chair professor for the Hutto-Patterson  Charitable Foundation in Child and Family Studies, the first Asian American faculty member to have been honored with an endowed chair professorship at the School of Social Welfare.

Dr. Chow was recently named a 2016 Fellow by the Society for Social Work and Research (SSWR). This prestigious honor is bestowed upon SSWR members who have worked to promote a diverse and equitable society and to advance research addressing issues of social work practice and policy.

In 2011, Dr. Chow was awarded a Fulbright Scholarship to become the first Fulbright Scholar in social work to visit the Department of Social Work at the Chinese University of Hong Kong, where he studied the development of social service systems and infrastructure in China.

He is one of the founders of the Cleveland Chinese School, a nonprofit organization that revolutionized language immersion programs by offering both a Chinese language curriculum to English-speaking children and English-learning classes for their immigrant parents. Dr. Chow has remained an active volunteer within the Asian American community and continually works to improve the lives of immigrants to the United States. Dr. Chow became a U.S. citizen in 1989.