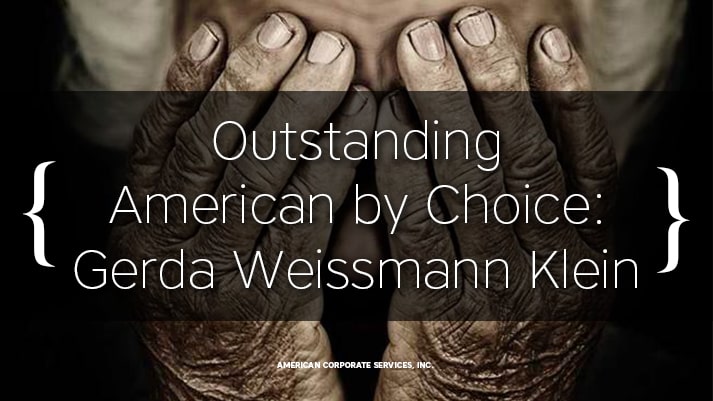 On January 29, 2011 in Bloomington, Minnesota Gerda Weissmann Klein was recognized as an Outstanding American by Choice Recipient. Founded by Gerda Weissmann Klein, Citizenship Counts teaches today’s youth and the community that citizenship is a gift. It is a gift that should not be taken for granted. As a humanitarian, author, human rights activist, Holocaust survivor and a proud naturalized citizen of the United States, Mrs. Klein has taken the powerful messages of hope, inspiration, love, and humanity to the world.

Mrs. Klein was born in 1924 in Bielsko, Poland where she lived until 1942. Her life changed in 1939 when German troops invaded Bielsko. After that until the end of World War II, she lived in fear and deprivation.

She was separated from her brother and parents and had to work in slave labor and concentration camps. Soon she would be forced to walk in a 350-mile death march. In 1945 at the end of the war, Gerda was left homeless and with no family or friends. She and U.S. Army Intelligence Officer, Kurt Klein, who was her liberator, were married. Mrs. Klein immigrated to the United States and became an American citizen. Her autobiography, All But My Life, has been in print for 53 years, in 62 editions and read by countless students.