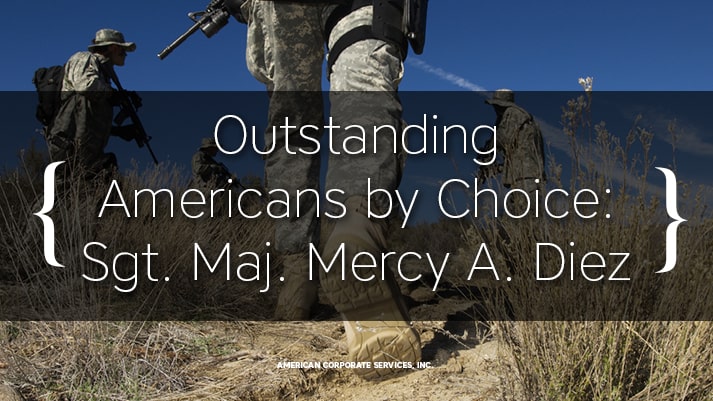 U.S. Army SGM Mercy A. Diez, a native of Cebu City, Philippines, was honored as an Outstanding American by Choice by the USCIS on November 11, 2015.

Given her fluency in languages, after joining the military in 1989, she was assigned to the Defense Language Institute and then to a post in South Korea as a military intelligence interrogator. Two years into her posting, she entered and won a talent contest. That exposure led immediately to a coveted spot as a performer with the 1991 version of the Soldier’s Show, a touring show dedicated to entertaining American troops around the globe.

Her performances with the Soldier’s Show gained her even more recognition which led to an invitation for her to join “Pershing’s Own,” The United States Army Band. She has performed as a featured vocalist with the band at the Kennedy Center, Carnegie Hall, in Norway, Sweden, the Netherlands and Australia, as well as the White House.Along with the USCIS, we salute Sergeant Major Mercy A. Diez, an Outstanding American by Choice.