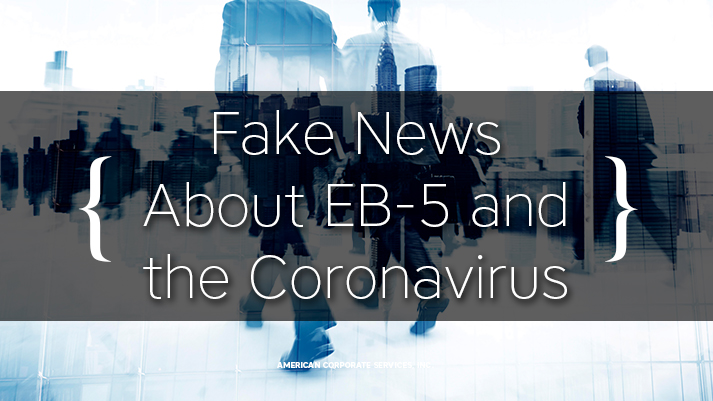 The media was quick to jump on a story claiming that U.S. Senator Lindsey Graham (R-SC) had attached an EB-5 revision proposal to the pending Coronavirus spending bill.

The first fake stories were based on a Fox News commentary by Tucker Carlson during the 8:00-9:00 time slot on Thursday evening. Apparently, someone had misled Carlson to believe that Graham had drafted an EB-5 reform proposal and had attached it to the Coronavirus spending bill currently under review in the Senate.

During the following hour on Fox, Senator Graham appeared live on Hannity. When asked about the alleged proposal, Graham responded,

It's absolute garbage. I haven't talked to anybody. I would object to putting anything in these bills that is not related to solving the problem.

As the threat of the Coronavirus increase, reporters may face extraordinary pressure to publish stories that capture the attention of the public. A reduction in the time necessary to verify facts before publication will inevitably lead to unintended fake news. Recently, President Trump said that he is a “wartime president,” meaning that we are at war with the Coronavirus.

Unfortunately, as it has often been said, “The first casualty of war is the truth.”

To prove our point, our researchers discovered another erroneous report about the EB-5 Visa program while we were fact-checking for this article.

The program is often described as a citizenship-for-loans scheme, in which American citizens are forced to share their citizenship with the wealthy foreign families who lend their money to wealthy American investors.

That description of the EB-5 program came from a usually-reliable news source.

At least for the short term, we urge our readers to be cautious when reading the news. In fact, we always recommend President Ronald Reagan’s advice to “trust but verify.”

Not sure what to believe?

We invite you to contact our Immigration Attorneys at the ACS Law Firm for more information regarding your immigration concerns. Our expert, multilingual staff is prepared to ensure that you have the facts.