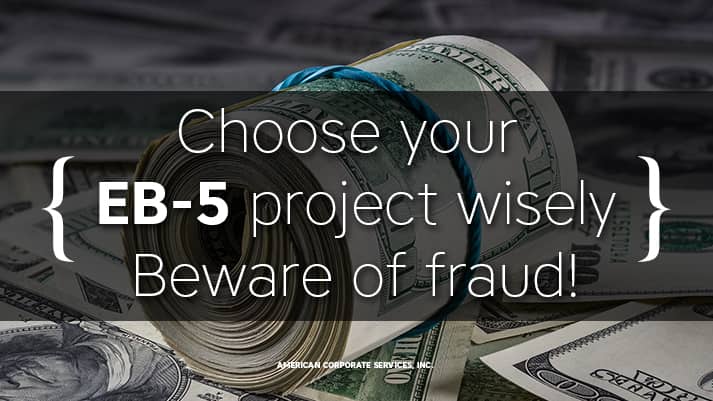 The U.S. EB-5 Immigration Investment Visa program has benefited tens of thousands of foreign investors and their families to immigrate to the United States since the inception of the program in the early 1990s.

However, especially relative to Targeted Employment Areas and the pooling of resources to support major projects, the program became an incubator for scams and fraudulent activities.

The Regional Center program was desirable for developers of multi-billion-dollar projects in the U.S., especially during the 2008 recession in which traditional capital funding sources were reluctant to fund development projects. Project managers and developers of new enterprises were able to tap into the combined resources of HNWI foreign nationals to fill the gaps left by reluctant lenders.

Yet, time and time again, projects were discovered to be fraudulent schemes designed to bilk investors out of their collective multiple millions of invested funds.

Most recently, two California men and a Chinese national have been charged “in an alleged immigration scam that raked in $110 million and defrauded more than 200 foreign investors.” Not only have the investors lost most or all of their invested capital, but 75 of them have already moved to the U.S. They may have to return to China with little hope of making their American dream come true.

On the other hand, there has been very little or no criminal activity associated with the direct investor program. One of the reasons for this is that, in the direct investor scheme, although the capital must be “at risk,” the investor often has at least some means of mitigating that risk by being involved in the management and operation of the new enterprise and the creation and preservation of jobs for American workers.

Ironically, the relative security of the direct investor approach and some recently approved changes to the EB-5 program might provide an incentive for potential investors to select the direct method as the wiser course of action.

How to invest versus how much to invest

ACS Law recommends that investors begin to think more about the wisdom of how to invest versus how much to spend. Risk management should be a primary concern with investments of this magnitude and the immigration opportunity that is at stake.

Nonetheless, there is also a brief window of opportunity to minimize the investment amount one must make before the November 21 changes.

Investors can avoid spending an additional $800,000 on non-TEA investment projects by filing their petition for the EB-5 Visa before November 21. Though the investment amount will increase on that date, individuals whose petitions have already been submitted will be accepted at the current standard and minimum rates.

Those investing in projects located within an approved TEA will avoid spending an additional $400,000 by filing before November 21.

Another factor that may affect a decision to invest directly or indirectly is that state and local governments and economic development entities will no longer have selection oversight or control of the composition of Targeted Employment Areas.

Effective November 21, the USCIS will take responsibility for TEA determination. The USCIS will take a much more disciplined approach to the TEA element, reducing, if not virtually eliminating, the opportunities for scam artists to defraud innocent investors.

Don’t make any decision in haste. There is too much at stake for you and your family, especially when immigration is your ultimate objective. But, do carefully consider the November 21 changes and how they may affect your immigration plans.

Immigration Attorneys at ACS Law Firm, and our entire staff are prepared to assist in answering your questions about the rules relevant to your immigration plans. Should you choose to retain us, we will be at your service throughout the entire process. More than 7,000 satisfied clients attest to our integrity and expertise.