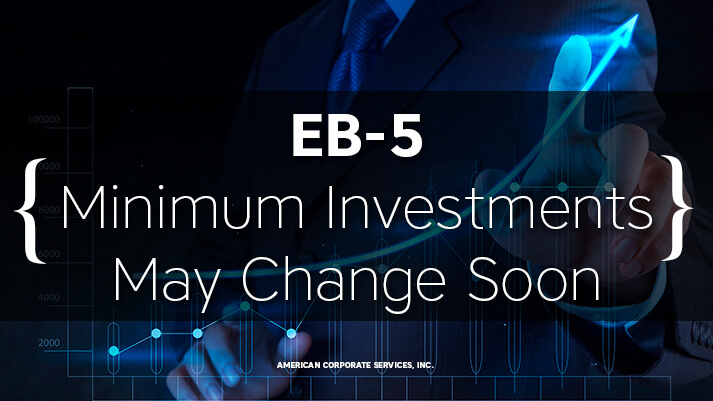 The EB-5 Immigrant Investor Visa program has been a boon to foreign investors and the U.S. economy. This has been especially true during the economic expansion in China and the recession in America. EB-5 has been the right vehicle at the right time. Now investors in countries like India (the second fastest growing economy behind China) and Vietnam are showing increased interest in the investment immigration program.

Speaking of “increased” and “investment,” potential EB-5 investors are once again faced with the potential of an increase in the minimum investments required to participate in the EB-5 program. Several proposals are on the table for discussion for legislation in the U.S. Congress and for regulatory reform at the United States Citizenship and Immigration Services (USCIS), a division of the Department of Homeland Security.

Several immigration reform bills have been submitted over the past several years, but none have been able to reach the floor of either the Senate or the House of Representatives for a vote. There are three bills currently pending that could initiate changes to EB-5 investment requirements if passed.

USCIS Division of the Department of Homeland Security

This is where the EB-5 investment question becomes a bit sticky. With Congress stuck in gridlock on immigration reform and dozens of other issues, the USCIS has indicated that, should Congress continue to fail to act, the department will exercise its own regulatory authority and introduce its own reforms. Those reforms include an as-yet-undisclosed increase in minimum investments.

However, the January 2017 Notice of Proposed Rule Making that is the basis for the DHS cited an increase of the EB-5 minimum investment from $500,000 to $1.35 million. Although the previous Final Action Date of February 2018 has passed, it was not ignored. The current Final Action Date is August 2018.

What It Means for EB-5 Investors

The DHS and USCIS, in cooperation with the Office of Management and Budget and the Office of Information and Regulatory Affairs, has positioned itself to act where Congress has been unable and/or unwilling to. August 2018 is three months away.

For investors, the impending increases are looming large and may be coming sooner than anticipated. Waiting for Congress is like Waiting for Godot. However, the waiting is over. The DHS and USCIS changes can be implemented without congressional approval.

We strongly recommend investors who are considering immigrating to the United States via the EB-5 Immigrant Investor Visa program to contact us right away so that we can begin the process before investment increases are imposed.

The attorneys at American Corporate Services Law Offices, Inc. understand the complexities of U.S. Immigration Law and are highly skilled at ensuring that our clients are fully equipped to understand the process and prepared to succeed with their petitioning process and gaining their Green Card as quickly and efficiently as possible.