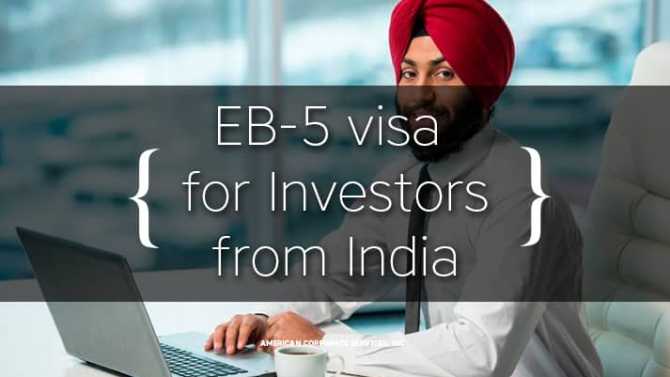 Natives of India are becoming increasingly more aware of the opportunities to immigrate to the United States via the USCIS EB-5 Investment Immigration Visa Program. Indian newspapers have reported recently that 23,000 millionaires have left India since 2014 and that the number of HNWI from India applying for the EB-5 Visa has tripled over the past four years.

Although the Indian economy is growing at an unprecedented rate, many professionals are still leaving India looking for better working and living conditions. Many see the opportunity of obtaining a Green Card through the EB-5 program as way to relocate their families to a more robust culture for education and business success.

In the past, Indians have been inclined to immigrate to the U.S. by using other visa programs such as EB-2, EB-3, and H-1B, each of which involves extraordinarily long waiting periods.

It is worth noting that nearly all U.S. visa programs take longer to process than most people would prefer. Complaints about the processing time for EB-5 visas have been fodder for countless articles published on the internet.

However, petitioners from India have experienced processing times of nine years for EB-2 (advanced degree) visas and 11 or more years for EB-3 (skilled worker) visas. Applicants for H-1B visas can expect anywhere from 10 to 15 years and, sometimes, as much as 20 years. That’s a lot of water under the bridge, especially if the U.S. education of immigrant’s children is a high priority. The waiting time for applicants from India in a USCIS-approved direct investment project is, on average, two to two-and-one-half years.

Despite naysayers preaching doom and gloom about the EB-5 program for several years, Congress seems reluctant to focus on revisions to EB-5 compared to the larger socio-political issues of illegal immigration.

Some experts are predicting that Indian applicants for EB-5 visas will double by the end of this year. Those with even a passing familiarity with the EB-5 program know that Chinese petitioners have, by far, been the largest group to take advantage of the investment program. The Vietnamese have ranked second but, if Indian applicants increase as predicted, they will take over the second spot.

There are, as with other countries, issues that make any pathway to immigration more complicated at the country of native origin. One of these is the limitation that the native country place on the amount of money an individual may take out of the country in a given year. Accurate documentation of investment income sources can often be cumbersome, for instance.

That is why we always stress the need to obtain experienced and expert legal advice from licensed Immigration Attorneys. The attorneys at American Corporate Services Law Offices, Inc. understand the complexities of U.S. Immigration Law and are highly skilled at ensuring that our clients are fully equipped to understand the process and prepared to succeed with their petitioning process and gaining their Green Card as quickly and efficiently as possible.