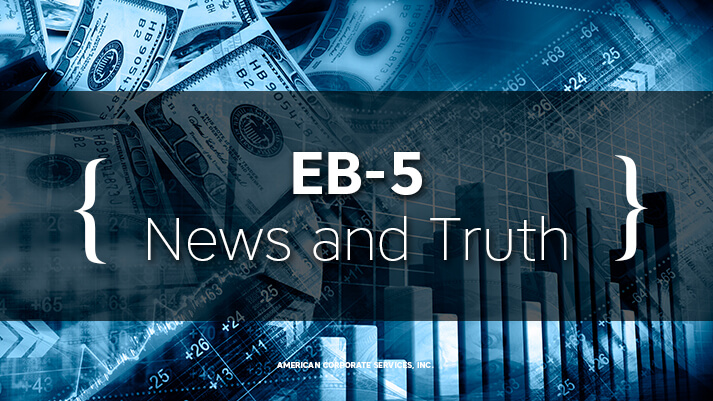 Sometimes it seems all news about the EB-5 Immigrant Investment Visa is bad.

The good news is that not all the bad news is completely accurate. For instance,

News: If Congress fails to pass impending spending legislation, the EB-5 program will no longer be available.

Fact. If Congress fails to pass impending spending legislation, it will more like pass yet another Continuing Resolution that funds government programs in question just as they are currently funded and have been for the past several years.

Fact: Only the continuation of the EB-5 Regional Center program might be at risk. If Congress passes a Continuing Resolution, the program will continue.

Fact: The EB-5 Direct Investment program will continue regardless.

News: Congress is considering revisions to the EB-5 program.

True, but not entirely factual.

Fact: There have been and are several Bills submitted for Congressional consideration and approval.

Fact: On average, more than 10,000 bills are introduced during every Congressional term. Only 4% (400) of all bills introduced ever become law. It has been rightly said that most bills introduced in Congress are dead on arrival when they are submitted to a committee.

Fact: Conversely, over 90% of all bills that are introduced fail.

While others may be alarmists, often with the possible motive to gain clients, American Corporate Services, Inc. is committed to integrity. Part of that commitment is providing clarity when others are saying that the sky is falling.

Granted, the EB-5 program has its problems, but they are not fatal to the program. We will continue to provide additional clarity in our next article. Specifically, that article will address options available for EB-5 applicants, particularly with respect to quicker processing.