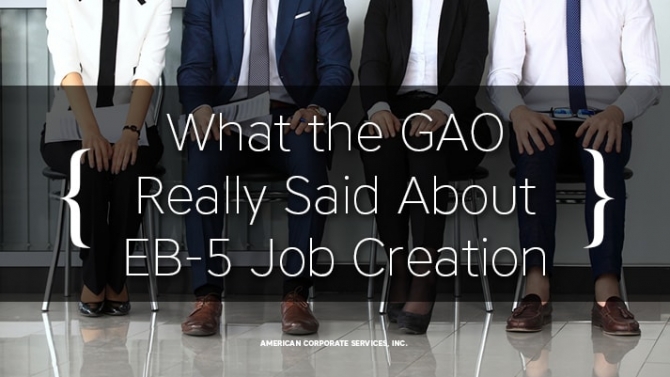 The Center for Immigrations Studies, which is clearly opposed to the USCIS EB-5 Investment Visa program in particular and most U.S. immigration programs in general, has once again published false and misleading information. An article posted on October 24, 2016 said,

“The majority of the money invested in projects that attract EB-5 (investor visa) funding does not come through that program; it comes from mainstream capital sources. But despite this fact, the alien investors continue to be given sets of green cards for their half-million-dollar inputs.”

The CIS seems to understand that half-truths are more deceptive than obvious, outright lies. In fact, the official GAO Report says,

“Our review of IPO documentation for one regional center project showed

that many immigrant investors would not have qualified to remove

conditions for lawful permanent residency without the practice of allowing

them to claim jobs created by all investments in the commercial

enterprise. In one case, about 450 immigrant investors contributed 30

percent (approximately $225 million) of the capital toward a nearly $750

million total investment in a regional center project, and all 450 immigrant

investors were able to achieve lawful permanent residency by claiming

distributed on a pro rata basis, only 315 of the 450 investors would have met the job creation criteria.”

The GAO report did not identify this as an abuse of the program. It was an observation about how prorating of job creation allocated to EB-5 investments relative to the overall capital stack would affect the program. It did not advocate for such a change.

If the CIS were reporting fairly, it would have also noted that the GAO report said,

“Most projects build in a job cushion to ensure that all investors meet the job creation requirements and to increase the likelihood that investors achieve approval for lawful permanent residency.”