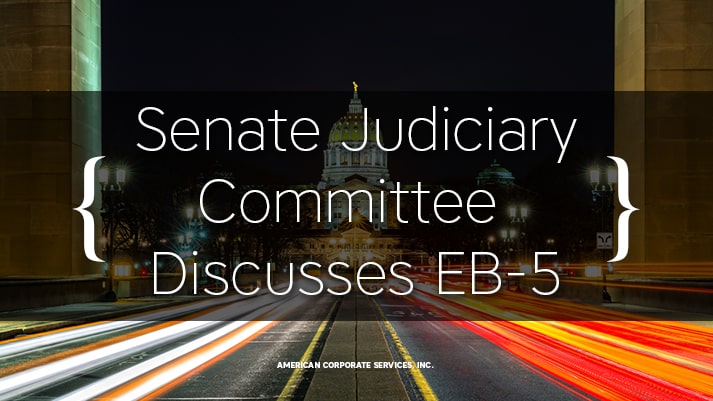 The full Senate Judiciary Committee met on Tuesday, February 2, 2016, for a hearing on “The Failures and Future of the EB-5 Regional Center Program: Can it be Fixed?”

Committee Chairman, Senator Chuck Grassley, blamed several advocacy and lobbying organizations for failure to pass reforms to the EB-5 program prior to September 30, 2015. He then went on to say:

“In 1990, Congress created an employment preference category known as EB-5 which was “intended to create new employment for U.S. workers and to infuse new capital into the country,not to provide immigrant visas to wealthy individuals.” Two years later, Congress revised theEB-5 category by establishing a pilot program allowing investors to use regional centers to pooltheir investments. This “pilot” program still exists, nearly 25 years later, but it’s deeply flawed,lacks adequate oversight, and has veered far away from congressional intent.”

As far as Grassley’s comments are concerned, things went downhill from there. He cited a list of 21 “flaws” in the current program, and nothing good about it. We are concerned that if this is the committee chairman’s outlook, his intention may not be reform, but to impose such burdensome reforms on the EB-5 visa program that taxpayer money will, once again, be siphoned off to create, not a better system, but a more controlled, burdensome one.

USCIS own Nicholas Colucci added a veritable laundry list of proposed bureaucratic actions that will give make the bureaucracy even more onerous is the name of reform.Do you want EB-5 reform? Be careful what you ask for. A video of the entire hearing is available here.