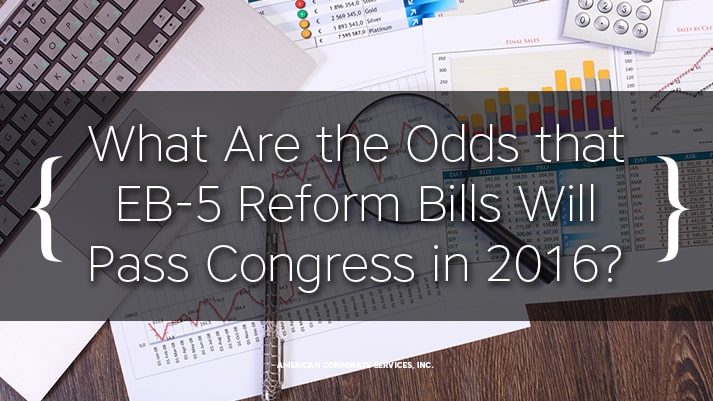 American Corporate Services, Inc., is not in the business of bookmaking, but we are in the business of giving, not only expert advice, but honest opinions about matters within the scope of our business. Immigration is at the core of what we do.

We have just begun a new year, the second year of the 114th Congressional session. Bills were introduced in both the House and the Senate in 2015 that, if passed, would revise some aspects of the EB-5. Those bills are:

The House Bill was introduced and referred committee on January 28, 2015. The Senate bill was introduced and referred to committee on June 3, 2015. Although both have received a great deal of publicity in the (pro and anti) immigration community, neither bill has moved forward since their introduction dates. And neither bill is listed among the Top Legislative Topics for 2016 by Bill Track 50. They has taken the back seat on the bus behind gun control, Planned Parenthood, Obamacare, criminal justice reform, and states’ rights.

To add to the odds against the passage of either bill, 2016 is an election year – the kind of year when more attention is directed toward campaigning than legislating.

Govtrack gives little hope that either bill will be enacted during the current Congressional Term. They give H.R. 616 a 0% chance and S. 1501 a slim 4% chance.

This does not mean doom and gloom for the EB-5 program. Rather, it is more likely that it will continue to be funded through future, necessary omnibus funding bills, just as it was in September and December 2015. Let’s not panic. Let’s be thankful that the program is still intact.

Dr. Gregory Finkelson’s new book, Moving Your Family to America – A Simple Guide to Business and Investment Immigration is now available in English and Chinese versions on Amazon. Click on the appropriate language link to order your copy now.