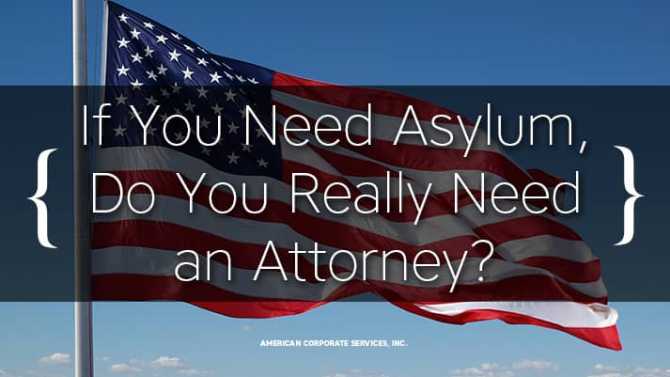 Do you really need an attorney to apply for asylum in the United States? The simplest, correct answer is ‘No.’

Now, let’s ask the question in a slightly different way by adding one little word.

Do you really need an attorney to successfully apply for asylum in the United States? Now the simplest, correct answer is ‘Yes.’

As living conditions in various countries around the world become more difficult because of nationalistic, ethnic, and religious persecution, more and more people are seeking a safe haven for themselves and their families.

The unfortunate reality is that there are more people seeking asylum than there are safe haven countries willing or able to take them in. Every country has to measure and know their capability of taking in refugees without endangering the welfare and security of its residents.

Any well-meaning asylum-seeker hopes to find a safe place for their family to call home and enjoy a peaceful existence. The fact that countries offer asylum indicates that they understand the perspectives and needs of the asylum-seekers.

Nonetheless, each country has established procedures by which they determine the veracity of the asylum claim and also which admissions are in the overall best interests of the country. This slight differential of interests between the seeker and their preferred country of asylum becomes problematic only when the number of seekers overwhelmingly outnumber the number of civil servants required to process all the applications in a timely manner.

Applying for asylum: hope and facts

When you consider the already complex and detailed process, the asylum offices and courts cannot afford to squander their time handling cases with incomplete and inaccurately prepared documents. The unfortunate result of appearing in an Immigration Office or Court without adequate preparation is that it will not end well for the asylum-seeker. More than likely, the applicant will be deported.

Statistics prove an applicant with a licensed Immigration Attorney is five times more likely to be granted admission to the United States than a person acting on their own or using translators, paralegals, or other advisors.


Consulting with an Attorney before applying for asylum also increases the chances for success. We understand that this is not always possible. That doesn’t mean that an applicant should not hire an Attorney later. It actually means that the need to hire one later becomes significantly more important.

A good Immigration Attorney will help prepare the petition for asylum, ensure that all of the documentary evidence of the case is immediately available, and will counsel the candidate on how to respond properly to questions asked during their interview with the immigration authorities.

If you or someone you know wants asylum in the U.S., be sure to secure the services of a professional, licensed Immigration Attorney who is familiar with the laws and the immigration process.


Immigration Attorneys of ACS Law Offices are multilingual, including Chinese and Russian. They have over 100 years of combined experience and expertise. We are available to review your situation and advise you on the best and right way to resolve your tenuous status.